Some persons are born to create history. Warren Buffet is one such person. He has not only made new rules to beat stock market but also has become a personality which will inspire and guide people for coming generation.

Let’s try to know about this legendary personality.Warren Buffet is the first stock market investor who secured a position in the list of five richest persons in the world. In 2008, he has reached at the top.
He has been also in the news due to his donations to charity. In 2014, He surprised everybody by donating 2.9 billion dollar to five charity institutions including The Bill and Melinda Gates Foundation.Still he is a part of the list of the richest persons. That’s why he has become an inspirational and motivational figure. Today everybody wants to know about him. His journey of life is as follows-

Warren Edward Buffet was born on 30 Aug 1930 in Omaha, Nebraska, USA. So, he is also known as the saint of Omaha or oracle of Omaha.His father was a stock broker.

# Beginning of a investor-
In a small age of 11 years, Buffet entered into the stock market by purchasing 3 stocks Citi Service at the price of 38 dollars. After purchasing the stock, its price began to fall. It fell to 27 dollars.Surprisingly, the child Warren didn’t loose patience. He waited till the price rose to 40 dollars. Then, he booked profit. But, the stock rose to 200 dollars. Warren took his decision a wrong one. He learned a great lesson to have patience to achieve the goal in the stock market.
In the age of 13 years, he filed his return. This was also a step to do something new in life.
In 1944-45, Buffet family went to Washington DC because his father had political aspirations. Even there Warren never sat idle. He started selling newspapers and magazines. We can see Warren’s eagerness to earn. This eagerness is very much required to get richer. Gradually, Warren collected 1200 dollars and invested this sum in a land. He bought 40 acres of land in the age 14 years only. What an achievement it was!
In the age of 15 years, Warren formed a firm with a school friend. The name of the firm was-Venture Wilson Coin Updated Machine Corp. Both used to set game machines in barbers’ shops and earned 50 dollars a week.

When we talk about stock market investors, we can’t complete it without discussing about Rakesh Jhunjhunwala. He has inspired thousands of people through his journey of life. Today each of us who is an investor wants to know about him and to learn from him. He was declared ‘Pin up boy of the current bull run‘ by the magazine India Today and ‘Pied Piper of Indian Bourses‘ by the Economic Times. 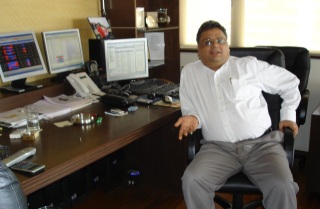 Rakesh jhunjhunwala was born on 5 July 1960 in Mumbai where his father was an income tax officer. It means that Rakesh got financial education from his early childhood.

Rakesh completed B. Com. from Sydenham College and then, he joined ICAI(Institute of Chartered Accountants of India) to become a chartered accountant.

After the completion of the course of CA in 1985, he decided to become a stock market investor. However, his mother was not satisfied with his decision to take investment as career because it was too risky in her eyes.

Rekha jhunjhunwala is Rakesh’s wife. So, he named his firm ‘Rare(Rakesh + Rekha) Enterprises’. He has three children.He lives at Malabar hill with his family.

Rakesh Jhunjhunwala started investing in stocks with merely 5000/- in his hands when BSE Sensex was at 150.

RJ manages his daily expenditures and requirements by the income from dividends.

From childhood Rakesh has interest in horses. He spends some time and money on them.

Film making is another passion that Rakesh has. He has produced two hit movies till 2015. One is Sridevi starer ‘English Vinglish’ in 2012 and the other is Amitabh Bachchan & Dhanush starer ‘Shamitabh’ in 2015.

He is a foody also. He likes street foods. His favorite dishes are Chinese foods, Idli Dosa. He also likes to cook Paw-Bhaji at home with his wife.

Rakesh also knows his social responsibilities. He donates 25% of his income from dividends to charity.